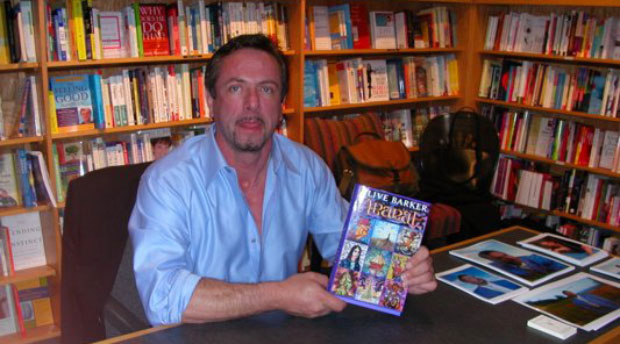 Clive Barker is one of the prominent contemporary English writers. Besides writing, he is recognized for his creative input in the domain of filmmaking, screenwriting and video game designing. His forte remained the genre of horror and fantasy fiction.

On October 5, 1952, in Liverpool, England, Barker was born to a painter, Joan Ruby and a personnel director, Leonard Barker. He received his early education from Dovedale Primary School and then went on to study English and Philosophy at the University of Liverpool. Barker began his writing career with the horror/fantasy genre, crafting short stories mostly. One of his horror short story collections includes Books of Blood. Subsequently, Barker wrote five further volumes of horror short stories by the same title. These horror stories were combined with the fantasy element, usually featured in the conventional horror fiction. In the contemporary setting, ordinary people are featured who find themselves in various terrifying scenarios.

According to Barker, he was inspired to write horror stories when he came across an anthology, Dark Forces. After reading it he realized that a collection can have horror stories varying in tone, themes and characterization. Also, it can even border on comic horror and tragic horror. Moreover, multiple stories from Books of Blood have been adapted for films and television series. For instance, “Rawhead Rex”, “The Forbidden” and “The Midnight Meat Train” are famously transformed into movies.

Additionally, Barker has written novels early in his writing career. In 1985, he published his first horror novel, The Damnation Game. The book narrates a Faustian tale that has certain scandalous themes at its center as such cannibalism, self-mutilation and incest. Subsequently, he touched upon horror fiction combined with urban fantasy in the novel Weaveworld (1987). It is classified as a dark fantasy presenting the concept of parallel worlds. In fact, it was nominated for the World Fantasy Award for Best Novel. The Great and Secret Show (1989) is another dark fantasy and marked as the first book in The Art Trilogy. His renowned fantasy series, The Books of Abarat, is targeted at the young adults.

Most of Clive Barker’s works deals with the concept of reality and blurs the line between fantastical world and the real one. He also explores the abstract notion of dreams, its significance and power of human mind in relation to memories and formation of language. The distinctive quality of his work is manifested in his creation of supernatural world coexisting with the real one. He himself has labeled the genre of his works as dark fantasy or ‘fantastique’. Moreover, his signature literary style confuses the concept of binary opposites, for example, moral and immoral. The idea of pleasure and pain is blurred in his work The Hellbound Heart. The major influences on his work include Edgar Allan Poe, Jean Cocteau, William Blake and William S. Burroughs.

Besides short story and novel writing, Barkers has been actively involved in screenwriting and film production. His early screenplays include Underworld and Rawhead Rex but after witnessing the disappointing picturization of his work, Barker went on to discover the art of filmmaking on his own. He produced The Forbidden and Salome to lukewarm response. He also directed several of the stories from The Book of Blood. Two of his acclaimed major motion pictures include Candyman series and the Hellraiser. In addition to that, he wrote several issues of notable comic books series; Hellraiser, Razorline and Nightbreed.