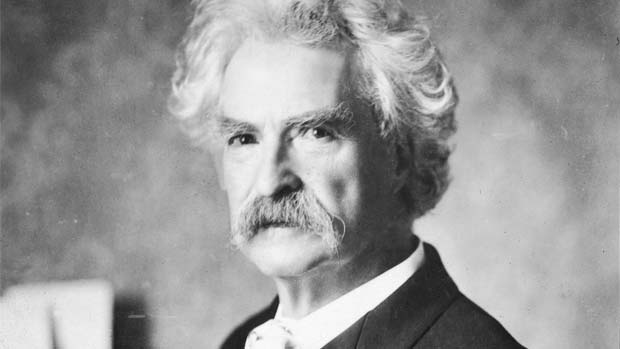 An iconic figure of the American literature whose works have reached, entertained and inspired a global readership, Mark Twain was the exceptional author of the famous Huckleberry Finn (1885) which is considered to be one of the first great American novels.

Mark Twain was born Samuel Langhorne Clemens on November 30, 1835 in Florida, Missouri. He was the sixth child of John Marshall Clemens, a judge and Jane Lampton who had no idea they had become parents to what would be one of the most famous personalities in America. In 1839, four years after his birth, Samuel’s family moved 35 miles east to their Hill Street home in Hannibal. The bustling port city of Hannibal where steamboats arrived from St. Louis and New Orleans day and night would later be featured fictitiously as the town of St. Petersburg in Tom Sawyer and Huckleberry Finn.

The death of his father in 1847 left the family in a financial crunch forcing Samuel to drop out of school while studying in grade five. He set out to work in order to support himself and the family. Among the many jobs Samuel undertook was becoming a printer’s apprentice and a journeyman printer. Samuel realized his love of writing while working as a printer and editorial assistant at his brother Orion’s newspaper. In 1857, a young Samuel left for St. Louis where he became a river pilot’s apprentice earning a license in 1858. He travelled frequently between St. Louis and New Orleans, with a growing appreciation for the world’s second longest river which he admiringly illustrates through words in his memoir, Life on the Mississippi (1883). It was during his days as a river pilot that Samuel acquired the pseudonym, Mark Twain which is a river term referring to being safe to navigate when the depth of water is 12 feet for the boat to be sounded.

The outbreak of Civil war in 1861 brought the river trade to stand still. Twain began working as a reporter for several newspapers all over the United States. Some publications he reported for included Territorial Enterprise, The Alta Californian, San Francisco Morning Call, Sacramento Union and The Galaxy. He travelled extensively during this period while prolifically writing short stories such as Advice for Little Girls (1867) and The Celebrated Jumping Frog of Calavaras County (1867) which was published in the New York Saturday Press. His first book, The Innocents Abroad was published in 1869. Mark Twain married Olivia Langdon in 1870. They had four children, one of whom died in infancy and two died in their twenties.

A productive writer, Twain continued to gain recognition as a writer for his work of quality. In 1876, he published The Adventures of Tom Sawyer followed by The Adventured of Huckleberry Finn in 1885. He was awarded an honorary Masters of Art degree from Yale University in 1888. Twain began a worldwide lecturing tour in 1895. Oxford University also awarded him an honorary Doctorate of letters in 1907. Some notable titles out of the 28 books and numerous short stories, sketches and letters Twain wrote are A Tramp Abroad (1880), The Prince and the Pauper (1882), The American Claimant (1892) and Following The Equator (1897).

On April 21, 1910, Mark Twain passed away leaving behind his legacy and writings which became an important part of world literature for forever.