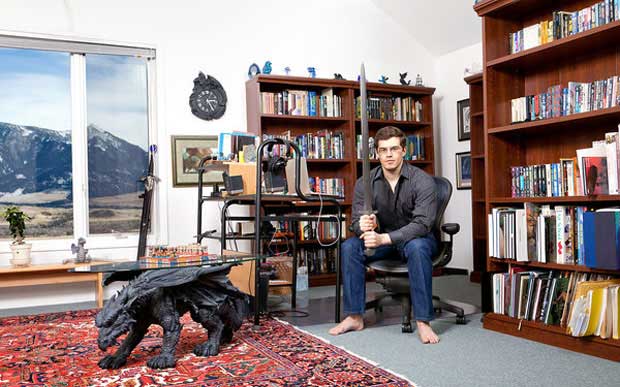 Christopher Paolini is one of the most well known American authors. He was born on 17th of November, 1983 in Los Angeles. His best piece of work is termed as Inheritance Cycle, which comprises of publications like Inheritance, Eldest, Eragon and Brisingr. He produced his first manuscript at Paradise Valley, Montana, where he initially used to live.

Paolini hails from a small family, which include his parents (Kenneth Paolini and Talita Hodgkinson) and a sister (Angela Paolini). He was brought up in Paradise Valle, Montana and lived there for long time. He graduated at the age of 15 from American School of Correspondence situated in Lansing, Illinois. He graduated in a set of recognized correspondence courses. After completing his graduation, he initiated his study, which later onwards turned into the novel, Eragon. This novel was the first part of the Inheritance Cycle. The novel was set in Alagaesia, which is a mythical land.

Paolini’s parents established a publishing company called Paolini International LLC. The company published the novel, Eragon in 2002. A lot of effort was put by Paolini in promoting the publication. He visited more than 135 schools and libraries and discussed his writing with the students and other people. During all his visits, he dressed himself in a medieval outfit consisting of a red shirt, black pants, brisky black cap and lace up boots. The title of the first edition of Eragon was having Saphira’s eyes. The maps were also included inside the book.

The stepson of the author, Carl Hiaasen read Eragon in the mid of 2002 and found it quite interesting. Hiaasen brought this novel into the consideration of Alfred A. Knopf, who was the publisher of Hiaasen. The offer of publishing Eragon and the other parts of Inheritance Cycle was then put forward by Knopf. In the year 2003, the second edition of Eragon was published by Knopf. Paolini reached the position of New York Times Bestselling authors only at the age of 19.

The work of Paolini is highly inspired by the work of E. R. Eddison and J. R. R. Tolkien.