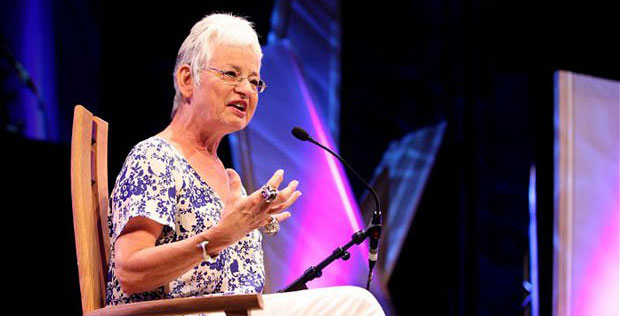 The award winning, Jacqueline Wilson is an English author of children’s books. She is best known for creating the character of Tracy Beaker who was first introduced to the world in The Story of Tracy Beaker (1991) which was followed by three sequels and two CBBC television adaptations namely, The Story of Tracy Beaker and Tracy Beaker Returns. Many of her novels have been adapted to screen on television. Very popular among a young readership, many of Wilson’s books revolve around the themes of divorce, adoption and mental illness. Several times, Wilson has been subject to controversy due to such themes in children’s literature.

On December 17th, 1945, Jacqueline Wilson was born in Bath, England. Her father was a civil servant and her mother, a housewife. Most of her childhood was spent in Kingston upon Thames where Wilson attended Latchmere Primary School. As a child, Wilson was highly imaginative and enjoyed reading and crafting stories. Some of her favorite childhood reads include books by Noel Streatfeild and classics such as What Katy Did and Little Women. By the age of seven, Jacqueline wrote regularly filling notebooks with her imaginative writings and at age nine, she composed her first novel which was 18 pages long. At school, Jacqueline showed immense promise in English language classes. Not being able to hold interest in her math class, Jacqueline would often stare out the window imagining stories. Her teacher nicknamed her Jacky Daydream. Wilson used this name to title the first portion of her autobiography.

Jacqueline proved to be an above average student at Latchmere after which she moved to Coombe Girls’ School where she still visits. Jacqueline undertook training as a secretary at the age of 16 but instead of becoming one she began working with the Dundee-based publishing company DC Thomson on a new girls’ magazine, Jackie. Jacqueline was given the job after she wrote an excellent piece on horrors of teenage discos. Here she fell in love with Millar Wilson, a printer whom she married in 1965. The couple had a daughter named Emma two years later. Many years later in 2004, the marriage came to an end when Millar left Jacqueline.

Focusing on her career as a writer, Wilson started off by writing crime fiction before moving on to children’s literature. Before her biggest success with The Story of Tracy Beaker, Wilson had already written some 40 books. For her exceptional literary works, Wilson has been honored many times with awards such as Smarties Prize, Guardian Children’s Fiction Award, Whitbread’s Children’s Book Award and Blue Peter People’s Choice Award to mention a few.

Jacqueline Wilson currently lives in Kingston upon Thames in her Victorian style villa. The villa supports her personal library of around 15000 books. An avid reader, Wilson continues to read fervently, finishing at least one books a week despise her busy schedule. Some of her most favorite writers include Katherine Mansfield and Sylvia Plath. Wilson also likes collecting unique children’s objects such antique dolls and a rocking horse. Furthermore, Wilson is also known for almost always dressing in black with chunky jewelry. Wilson is also a music admirer, Queen and Freddie Mercury being her favorite. She begins her day by swimming 50 lengths every day before breakfast.