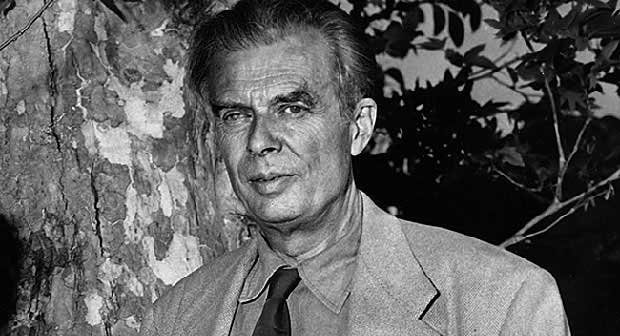 Aldous Huxley was an English literary author who is renowned for his novel, Brave New World, which was published in 1931. Apart from writing novels, he also wrote a few travel books, poems, plays and several essays on religion, art and sociology.

He was born in Godalming on 26th July, 1894 in an upper scale family. He came from a literary background, his father also being a biographer, editor and poet. Huxley was educated at Eton College in Berkshire from 1908-1913. When he was just fourteen years old, his mother died. During his teenage years, he also suffered from an attack of Keratitis Punctata and thus became blind for about eighteen months, but then by wearing some special kind of glasses, he was able to recover his eye-sight a little and at least read, but consequently also learned Braille. Even though he had frequent conditions of near blindness, Huxley went on relentlessly with his studies at Balliol College in Oxford, where he received his B.A in English. He was confused whether to pursue his career as a scientist or take part in the World War. Since, he was unable to decide, he took up writing.

He wrote several poems, which appeared in 1916 and the second volume, which appeared in 1920. Huxley’s novel, Crome Yellow came in 1921, which blended criticism, dialogue, wit and satire and also established Huxley as one of the most important literary authors of the decade. Within a period of 8 years, Huxley had written several books. Amongst these novels, the most notable ones are Point Counter Point published in 1928 and Do What You Will published in 1929.

During the year of 1920, Huxley also developed a very strong association with D.H. Lawrence, and he also traveled to Italy and France with him. He stayed in Italy for a couple of years until 1930 when he moved to Sanary, which also inspired him to write his novel, Brave New World, a take on the dark aspects of technology flourishing in society. Huxley also developed a keen interest in the Peace Pledge Union around that time. Later in 1937, Huxley traveled to the U.S.A with the belief that the Californian climate would aid in improving his eye-sight, which was being a major burden. This also proved to be the turning point in his life, because Huxley gave up on writing fiction and chose essays as the tool for expressing his ideas.