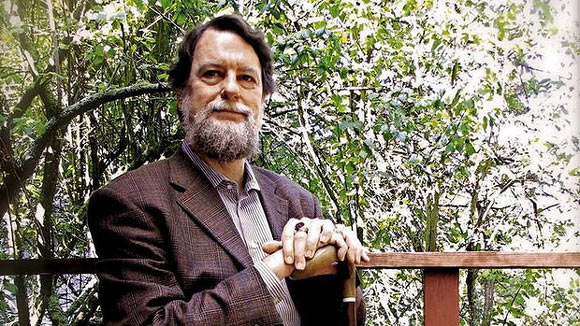 Robert Jordan is the late author of the highly successful “The Wheel of Time Fantasy” fantasy series which soon became a bestseller. The name “Robert Jordan” was just another one of the few pseudonyms that James Oliver Rigney, Jr. wrote under in addition to pseudonyms such as Jackson O’Reilly and Reagan O’Neal.

Robert Jordan was born in Charleston, South Carolina on 17th October 1948.  Jordan became fond of reading when he was only just a young boy. Under the negligible guidance of his elder brother he practically taught himself how to read at the tender age of 4. By the time he was 5 he had already read books by great authors such as Jules Verne and Mark Twain. It is not surprising that as a child Jordan knew he wanted to become a writer.

From 1968 to 1970 Robert Jordan served two tours as a helicopter gunner in Vietnam with the U.S Army. He had the prestige of receiving the Distinguished Flying Cross with bronze oak leaf cluster. He also attainted the Bronze Star with “V” and bronze oak leaf cluster. The Vietnamese also decorated him with The Gallantry Cross which is rewarded to soldiers and units “accomplishing deeds of valor or displayed heroic conduct while fighting an enemy force”

Upon his return from Vietnam he went on to gain a degree in physics from The Citadel, The Military College of South Carolina. Following his graduation he started to work as a nuclear engineer for the United States Navy. He began writing in 1977 and in time wrote “The Wheel of Time Fantasy” – arguably the best and most prominent Fantasy series written, which rapidly topped the best-seller charts.  The title of “The Wheel of Time Fantasy “was inspired by Hindu Mythology. It went on to sell more than 14 million copies in North America and up to 44 million copies globally. The series inspired the making of a role-playing game, soundtrack album and computer game.

Jordan was a history enthusiast, displaying a particular interest in the history of Charleston and the Military.  He enjoyed hunting, sailing and fishing from outdoor activities. Indoors, he liked playing pool, poker and chess.  He claimed to be an Episcopalian. He also disclosed that he was a Freemason but said that like his ancestors he did not publicize it due to the negative connotation of Freemasonry. He resided with his wife Harriet McDougal who is a book editor, also working for Jordan.

Jordon released a statement on March 23 2006, announcing that he was diagnosed with cardiac amyloidos; a rare blood disease.  He said that the doctors had estimated that he would live for only 4 years; however he also said he planned to prove them wrong. He even encouraged his fans to not fret over his health as he planned on an innovative long life via his blog.  In the beginning of April 2006, Jordan started chemotherapy at Mayo Clinic in Rochester, Minnesota. He took part in a study that used the drug which had recently been accepted for multiple myeloma – Revlimid. Revlimid had not yet been used to treat Jordan’s condition.

Jordan passed away on September 16, 2007. He was cremated with his ashes being buried at an Episcopal church. Jordan wrote many notes while he was ill so that an additional novelist could finish his series the way he desired. After his death, his wife chose a fantasy author and avid fan of the “Wheel of Time” series, Brandon Sanderson to end the final book. However, it was realized that material was too much to get published in one book, and so should be published as three volumes.