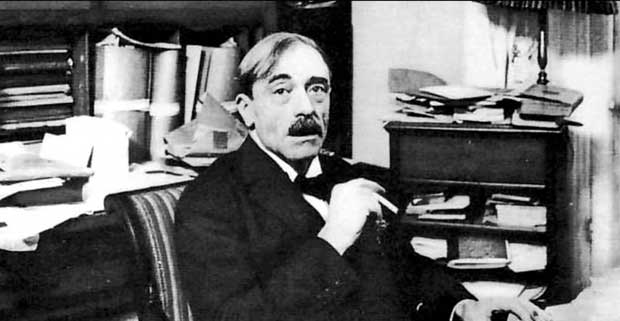 The French polymath Paul Valéry was born on October 30, 1871 in Sète. In addition to being a poet, essayist and critic, Paul Valéry was also known to be a distinguished philosopher. His diverse writings range from dramas, dialogues, poetry to aphorisms on topics of current events, music, diatribes, history and human nature.

Ambroise-Paul-Toussaint-Jules Valéry was the son of Barthelmy Valéry, a Corsican customs officer at the sea port of Sète. His mother, Fanny Grassi belonged from Venetian nobility. After an initial catholic education, Valéry studied law at the University of Montpellier, obtaining his license in 1892. For most of his life after graduation, Valéry lived in Paris. Valéry had developed the habit of writing since a young age. His earliest publications date back to his mid-twenties. However, he did not take up writing as a full time activity until 1920.

In Paris, Valéry became a regular visitor to Stéphane Mallarmé’s literary Tuesday evenings. His passion for writing remained in his personal notebooks in which most of the writings of this period were inspired by Leonrdo da Vinci. The notebooks were published posthumously in 1957-1960. Valéry went through the phase of a personal crisis after a passionate infatuation with a young Spanish girl. After the episode, Valéry decided to free himself from the falsehoods of sentiments and literature. The change he called revolution of mind came into his life on a stormy night in Genoa. He took away from writing poetry and instead devoted himself to maximum knowledge and control of his intellect. However, Valéry produced two prose works during his silent years as a poet. These works were Introduction De La Methode De Leonard Da Vinci (1894) and La Soiree Avec Monsieur Teste (1896).

In 1896, Valéry began working for the British South Africa Company in London followed by three years in the artillery ammunition bureau of the French Army. In 1900, Paul Valéry stepped into marriage with Jeannie Gobillard and was also employed at the Havas news agency where he worked as a private secretary to Edouard Lebey, an important executive suffering from Parkinson’s disease. For 20 years, Valéry stayed at the position.

Being left unemployed after Lebey’s death, Valéry was forced to publish his writing to support himself. Breaking the 20 years silence, Valéry contributed to periodicals, magazines and wrote prefaces for both historical and modern works. In 1925, Paul Valéry was elected to the Académie française. He became a distinguished intellectual figure as well as public speaker in the French society. In addition to representing France on cultural matters at the League of Nations, Valéry also served on several of its committees. In addition to Académie française, Valéry was also a member of the Academy of Sciences of Lisbon, and of theFront national des Ecrivains.

Paul Valéry died in Paris on July 20, 1945. His last principal work was the Faust fragments on which he began to work in 1940.