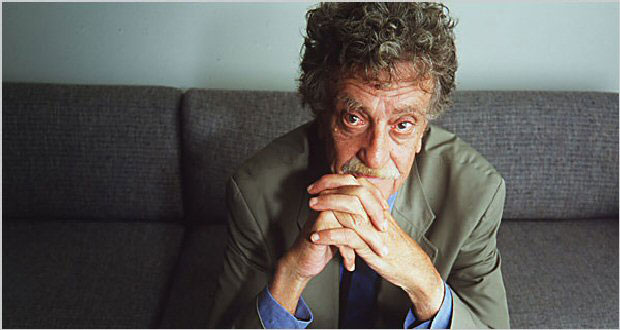 One of the most influential American writers and novelists of the 20th century, Kurt Vonnegut is best known for writing Slaughterhouse-Five (1969), Cat’s Cradle (1963), and Breakfast of Champions (1973). His works are a blend of science, satire and black comedy. Vonnegut was also famous for his humanist beliefs and was the honorary president of the American Humanist Association.

Kurt Vonnegut was born on November 11, 1922, in Indianapolis, Indiana. His writings have left a deep influence on the American literature of the 20th century. Vonnegut created his own unusual world in the novels he wrote making them a blend of literature, science fiction and humor accompanied with absurd social commentary. The novels were also filled with unusual characters such as the alien race known as the Tralfamadorians in Slaughterhouse-Five (1969).

For two years beginning in 1940, Vonnegut studied at Cornell University after which he enlisted in the US army. In 1943 the army sent him to study engineering at Carnegie Mellon University. A year later, he was sent to Europe where he fought and served in the Battle of the Bulge. Vonnegut was captured and made a prisoner of war during the battle. During this time, Vonnegut witnessed the devastation caused in the period of Allied firebombing of Dresden, Germany. He escaped the effects of destruction because he was working in an underground meat locker making vitamins with other prisoners of war. Upon his return from the war, Vonnegut married Jane Marie Cox, his high school girlfriend with whom he had three children. The couple also adopted the three children of Vonnegut sister when she passed away in 1958. Before establishing himself as a writer, Vonnegut worked several jobs including newspaper reporter, teacher, and public relations employee for General Electric.

In 1952, Vonnegut published his first novel, Player Piano which revolved around the theme of corporate culture. Player Piano was followed by more novels including The Sirens of Titan (1959), Mother Night (1961), and Cat’s Cradle (1963). War remained a common subject in many of Vonnegut’s works including his most acclaimed, Slaughterhouse-Five which derives a lot of drama from his own experiences at war. The novel became a bestseller due to its unique blend of fantasy, exploration of human condition and war.

With more of his works being published, Kurt Vonnegut began to be recognized as an emerging talent and a new kind of literary voice. His unusual writing style, long sentences with little punctuation and humanist views gained him an increasing popularity. Continuing to write short stories and novels, Vonnegut produced more works such as Breakfast of Champions (1973), Jailbird (1979), Deadeye Dick (1982) and Palm Sunday: An Autobiographical Collage (1981).
Despite becoming a successful novelist and a literary icon with a devoted following, Vonnegut struggled with an ongoing problem of depression. In 1984, Vonnegut tried to take his own life by making an unsuccessful attempt to commit suicide. Vonnegut’s last work of fiction, Timequake (1997) was also a bestseller. Towards the end of his life, Vonnegut focused on writing non-fiction works. His last book was A Man Without a Country, a collection of biographical essays. On April 11, 2007, Kurt Vonnegut died at the age of 84 after getting head injuries due to falling at his home in New York a few weeks earlier.