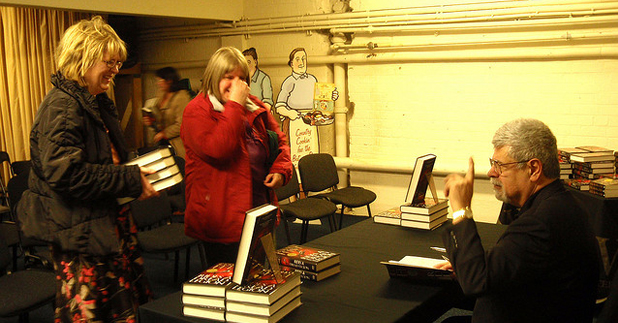 Raymond E. Feist was born in 1945 – the same year the Second World War came to an end. He was born in Los Angeles, California. He was born with “Gonzales” as his surname, however he later assumed Feist as his last name when his mother married Felix E. Feist. Feist is a popular writer of fantasy fiction who has sold above 15 million copies in addition to being translated into several languages, widely known for his “The Riftwar Cycle” series.

In 1977 Feist gained a Bachelors of Arts degree in Communication Arts with Honors from the University of California. It was at this point in time that he gave thoughts to writing about a boy who could practice magic. He ultimately wrote such a book after two years which was published in 1982 by the name of the “Magician” – his first novel.

The positive reception his first novel “Magician” facilitated Feist to give writing his complete devotion. Consequently he wrote an additional two books. He wrote “Silverthorn” as well as “Darkness at Sethanon”, which are a part of his popular “Riftwar Saga”. He went on to write “Empire Trilogy”, “Daughter of the Empire”, “Servant of the Empire” and “Mistress of the Empire” in collaboration with Janny Wurts. These novels gave emphasis to the Riftwar from the Tsurani perspective as opposed to the original series which was seen primarily from the Midkemia point of view. In addition, “The Serpentwar Saga” has been made available.

Feist cites Robert Louis Stephenson who wrote “Treasure Island” and “Kidnapped” along with Alexander Dumas, author of “The Three Musketeers” as writers to have had the most literary influence on him in terms of writing style and him in general.

In his university days Feist and his friends fashioned a game that was based on the fantasy world named “Midkemia”.  He later wrote extensively on particulars of the world of Midkemia and in time became a fundamental aspect of the Riftwar Cycle Trio.

He had previously been married to the novelist Kathlyn Starbuck. At present, Raymond resides in San Diego, California with his two children – boy and girl. He enjoys collecting fine wines and has an interest in learning about History, particularly the History of American Football.