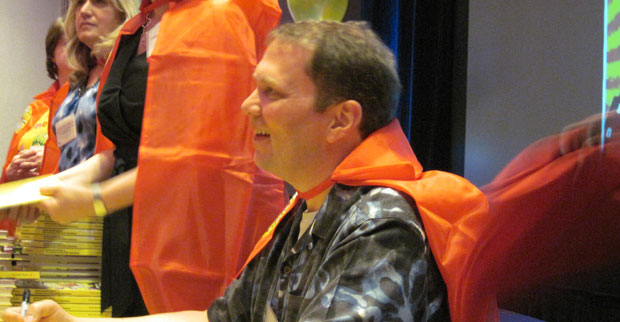 David Pilkey, who is also known by the pen name, Sue Denim was born on 4th March, 1966 is a very famous and renowned American writer and illustrator of children’s literature. He is most popular for being both the author and illustrator of the Captain Underpants book series. He occasionally also uses the pen names of George Beard and Harold Hutchins. Pilkey resides with his wife, Sayuri near Seattle, Washington.

His father’s name was David Pilkey and mother’s name was Barbara. He also has one older sister whose name is Cindy. While Pilkey was in elementary school in Elyria, Ohio, he was diagnosed with and suffers from dyslexia and attention deficit hyperactivity disorder. He was therefore chided for his behaviour in school several times and consequently took to sitting at a desk in the school hall, where he fantasized and created the character of Captain Underpants. Pilkey gave his book, World War Won for entry in a national competition for student authors and won the prize in his age bracket. As a result of the award, the book was published in 1987.

The peculiar spelling of his name came when he was employed briefly at Pizza Hut, when the “e” was removed from his nametag. Although, it is spelled as Dav; it is still pronounced as Dave.

When he relocated to Washington, he met Sayuri, a professional musician and also the owner of his favourite Japanese restaurant. They started dating in February of 2005 and got married in a private ceremony later that year.

Pilkey took a sabbatical from writing for a couple of years, in order to care for his father who became severely ill. However in March 2010, he signed a deal with Scholastic in order to come out with four new books. The first book, which was essentially a graphic novel, The Adventures of Ook and Gluk, Kung-Fu Cavemen from the Future came out on 10th August, 2010. The second book, which was another graphic novel, of which there was immense anticipation for 9 years, “Super Diaper Baby 2: Invasion of the Potty Snatchers”, came out on 28th June, 2011.

Dav Pilkey is regarded as one of the most popular writers, especially for children in elementary school. He is also considered to be a skilled artist.