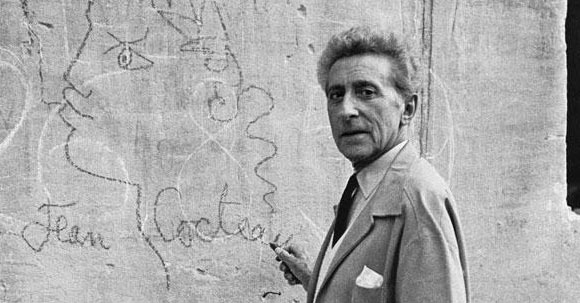 Jean Cocteau was a celebrated name in the twentieth century French Literature. He was a versatile personality who produced literary work in multitude of genres as a dramatist, novelist, poet and a filmmaker. He is famous for his novel Les Enfants Terribles (1929).

Jean Maurice Eugène Clément Cocteau was born on 5 July 1889 to an elite Parisian family. Despite the high social stature of his family, Cocteau suffered in his youth when his father committed suicide and then he left home. At the young of nineteen he published his first collection of poem, entitled Aladdin’s Lamp. Another volume was published in his early twenties named, The Frivolous Prince. The title of the volume became his identity among Bohemian artistic circles. He met and later collaborated with other renowned writers, artists and poets oh his time including, Marcel Proust, Pablo Picasso, André Gide, Guillaume Apollinaire and Maurice Barrès.

In 1917 Cocteau wrote Parade, a scenario for a ballet, on a Russian impresario Sergei Diaghilev’s request. Diaghilev produced the ballet in collaboration with Picasso who made the set and Erik Satie and Apollinaire’s music. Cocteau penned libretto for opera-oratorio Oedipus Rex produced by Igor Stravinsky. Although, he denied being a Surrealist proponent, he had a great deal of interest in avant-garde art. His work in this form of art inspired other writers and poets but especially composer group named Les Six.

Cocteau collaborated extensively with a famous French poet, Raymond Radiguet. He used his influence to have his friends work published and rewarded as well. Critics argue over the fact that Radiguet’s untimely death was the cause of Cocteau’s opium addiction. However, others are of the view that his addiction and friend’s death are disparate issues. Whichever the case might be, Cocteau’s addiction and his struggle to quit it had a deep impact on his later works and literary style. During his weaning habit of drug intake he wrote a distinguished piece of literature, Les Enfants Terribles. The English translation of the title is The Holy Terrors which was published in 1929. The novel is psychodrama depicting two growing up siblings’ anxiety caused by their self-imposed isolation as they were young. The book is considered a masterpiece for its unconventional story with a psychological approach.

Moreover, Jean Cocteau’s experimentation of human voice in his plays was an avant-garde technique. His play La Voix humaine (The Human Voice) is famous for this technique in which a woman is shown on the stage talking on the phone with her lover who is leaving her to marry someone else. The one-sided conversation goes on for an hour without any interruption or actor. It is noted that despite the simplicity of the play it has many allusions to Vox Humana experiments of Dadaists. Some believe that the inspiration for La Voix humaine was drawn from Henri Bernstein, Cocteau’s fellow French playwright.

Cocteau also made a huge name in filmmaking. He is accredited for introducing avant-garde filmmaking in the French cinema. His notable projects include Blood of a Poet (1930), Beauty and the Beast (1946) and Les Parents terribles (1948). He was a good friend with Pablo Picasso along with the entire European art community. Picasso made a cameo appearance in Cocteau’s final movie, Le Testament d’Orphée. At age 74, on 11 October 1963, Jean Cocteau passed away after suffering from a fatal heart attack.