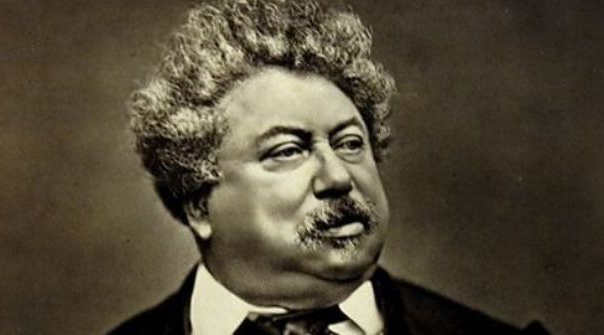 Alexandre Dumas was a celebrated nineteenth century French author, deemed one of the most widely read French writers to date. He prolifically wrote under multitude of genres but his forte remained novels and plays. His chief literary works include The Count of Monte Cristo, La Tour de Nesle and The Three Musketeers.

Dumas Davy de la Pailleterie was born the same years as his contemporary, Victor Hugo, in 1802 in Villers-Cotterêts, Aisne, France. His father, Thomas-Alexandre Dumas, was the first French colored brigadier general in Napoleon army but after his death the family suffered severe poverty. Unable to afford the school’s expenses, his widowed mother could not provide him formal education. However, Dumas’s passion for reading paved way for him and helped him learn Spanish on his own. Also, he grew up hearing the stories of his father’s bravery and valor in the wars from his mother which left a remarkable impression on him. With the restoration of monarchy, he moved to Paris where he was appointed at the Palais Royal for Louis-Philippe.

Dumas did a stint in theater and magazine publication while working at Palais Royal. He began to write articles for magazine and plays to be staged in theater. At the age of 27, he penned down his first play, titled Henry III and His Courts (1829) and it turned out to be a raging success. In 1830, his play Christine appeared that garnered equal praise. The well reception of his plays earned him enough to begin a full-time writing career. When his former employer, Duke of Orléans, came to power, France experienced a period of unrest but gradually the order restored and economy improved. Also, the censorship on press content lifted which provided an opportunity for Dumas’s literary skills to flourish.

After successfully producing a number of plays, he experimented with the genre of novel. He also revised and serialized one of his plays, Le Capitaine Paul, in a magazine. During late 1830s, he compiled an eight-volume collection of essays, Celebrated Crimes, in collaboration with his friends. The collection was based on the historical and recent European crimes and criminals. The perpetrators and crimes featured included the infamous Martin Guerre, Lucrezia Borgia, Antoine François Desrues and Cesare. In 1940, he authored the novel, The Fencing Master, based on the experience of his fencing master during the Decembrist revolt in Russia. Russia imposed ban on the novel and on its writer’s entry in the country during Czar Nicholas I’s rule. In 1844, the critically acclaimed adventure novel The Count of Monte Cristo appeared. It is based on historical account of France and narrates the tale of the vengeance of a wrongfully imprisoned man. The book has now been given the status of a classic.

Another one of Dumas’s masterpiece, The Three Musketeers, originally appeared in serial form in a newspaper. It is an adventure story set in the 17th century featuring a young man named d’Artagnan in pursuit of joining the Musketeers of the Guard and his friends The Musketeers. Upon reception of positive reviews, Dumas wrote two sequels to the novel; Twenty Years After and The Vicomte of Bragelonne. The trilogy is known as the d’Artagnan Romances. His other renowned fiction and non-fiction works include The Corsican Brothers, The Knight of Sainte-Hermine, Impressions de voyage: En Suisse and Adventures in Czarist Russia. In December 1870, he passed away and interred at his birthplace, Villers-Cotterêts.