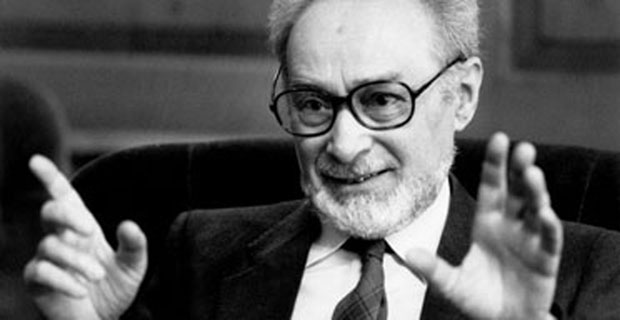 The Italian Jewish chemist and writer, Primo Levi was born into a liberal Jewish family on July 31, 1919 in Turin at Corso Re Umberto. During his lifetime, Levi wrote two novels and several collections of essays, poems and short stories. Levi was best known for If This is a Man (1947), which is an account of Levi’s time spent as a prisoner in the Auschwitz concentration camp in the Nazi occupied Poland. Another well known of works by Primo Levi is The Periodic Table (1975) which was recognized as the best science book ever written by the Royal Institution of Great Britain.

Primo Levi was the son of educated parents who ignited an interest of reading and education in Levi from a young age. Levi’s sister, Anna Maria was born in 1921. Levi stayed close to Anna throughout his life. For most of his life, Lev lived in an apartment which his father gave to his mother as a wedding gift. Levi attended the Felice Rignon primary school. Although an excellent student, Levi was not a very confident child. He thought of himself being ugly. His school records show prolonged absences. He was tutored at home during these times by Emilia Glauda and then by Marisa Zini, daughter of philosopher Zino Zini.

In 1930, Primo Levi enrolled in Massimo d’Azeglio Royal Gymnasium where he was known to be the youngest, shortest and the cleverest of all boys. Three years later Levi joined the young Italian Fascist movement, “Avanguardisti” like his fellow Italian schoolboys. In secondary school, Levi got bullied for being small and Jewish. Levi first gained interest in Chemistry when he read Concerning the Nature of Things by Sir William Bragg after which he decided to become a chemist. Levi faced discrimination for being Jewish at various levels but was able to get through everything. In 1937, he entered the University of Turin to study chemistry. A year later, after graduation, Levi took the full-time chemistry course. In 1939 Levi started mountain hiking. Hiking made Levi release his frustrations of life, war and struggles.

The discrimination against Jews made it difficult for find a supervisor for his graduation thesis. However, Dr. Nicolò Dallaporta finally agreed to supervise his thesis. Levi graduated in 1941 with full marks, merit and an additional thesis. However still, he was unable to find a suitable job because of his religion and his degree certificate bore the remark, “of Jewish race”. Levi was able to secretly obtain a job as a chemist and he continued to switch and work on various jobs related to the field of chemistry.

Levi and his family were caught up in the Italian liberation movement. They were forced to flee and hide. Levi joined fellow comrades and took to the foothills of the Alps and in October 1943 in order to join the liberal Giustizia e Libertà partisan movement. However, Levi was taken captive by the Fascist militia. On 21 February 1944 Levi was transported to Auschwitz concentration camp complex where he remained for 11 months before being liberated by the Red Army on 18 January 1945. During this time, Levi spent a lot of time reading German publications and gaining German language skills.

Upon returning to Turin, Levi suffered immense physical and mental trauma and he was unable to find work. He began writing poetry and other works beginning his career as a writer. He produced many great works still admired by readers all over the world. In 1947, Levi married Lucia Morpurgo. On April 11, 1987, Primo Levi died after falling from the interior landing of his third-story apartment in Turin to the ground floor below. Witnesses state it was a case of suicide.