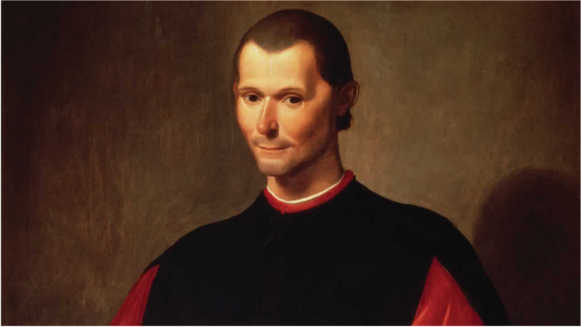 Early sixteenth century Italian political and literary figure, Niccolò Machiavelli, was the pioneer of the modern political theory. Inspired by his masterpiece, The Prince, the term “Machiavellian” was coined to describe the use of unscrupulous methods to achieve diabolical ends as endorsed by Machiavelli in the book.

On May 3, 1469, in Florence, Italy, Niccolò di Bernardo dei Machiavelli was born during the period of great political upheaval. Italy was divided into four city-states where popes had waged war in acquisition of power. In fact the other European states had set their eyes on Italy with the same intention. At the age of 29, Machiavelli first stepped into a government position, shortly after Savonarola’s execution. Notwithstanding his lack of administrative background, he was appointed the second chancellor of the Florentine Republic. His position required him to produce official Florentine government documents. The reason he was elected for this powerful diplomatic post was because of his educational background. During the late fifteenth century, humanism was at rise and the Italian humanists underlined the significance of classical studies. Machiavelli, having expertise in ancient history, moral philosophies, classical studies and Latin, was deemed perfect candidate for the position.

Being a diplomat, Machiavelli was required to strengthen the foreign and diplomatic relations of the Republic. For that purpose he travelled across Europe observing the rise and fall of regimes and their leadership. These observations he made while serving as a diplomat and ambassador developed his insight of the effective methods of sustaining leadership. His later works substantiate the fact that a wide portion of his political philosophy was fundamentally based on the impact of the sociopolitical climate of his time. For over a decade, he served as a diplomat during the temporary downfall of the Medici family. During this time, he earned a scandalous reputation for his blatant acts. He was caught devising a plan against the return of the Medici family. Thereafter, he was banished from any active role in political affairs after being tortured and jailed.

The time followed his political inactivity was a dark chapter in his life. However, he utilized the time reading Roman history and the insight he gained resulted in the magnum opus, titled The Prince. It is considered a highly influential and equally scandalous political handbook. The central theme of the book is the willpower versus fate. According to Machiavelli, man controls his own fate which dictates one to gain power by resorting to any means possible regardless of the depravity it entails. Critics are divided on the subject whether the eponymous character is inspired by the notorious Cesare Borgia, or the book was merely a satire. It was openly condemned by Pope Clement VIII for endorsing the exercise of fear and deception to rule a kingdom.

In addition to that, Machiavelli penned numerous satirical plays, poems, biographies and political treatises. Some of his works include a biography, Life of Castruccio Castracani, a play, Mandragola, a historical treatise, The History of Florence and a political treatise On the Art of War (1521). His political treatise, Discourses on Livy, sheds light on his diplomatic experiences and political observations he made from historical events about the rules of statecraft. Despite his ultimate wish to resume his political career, it was never granted. Died in 1527, Niccolò Machiavelli was interred in his tomb in the church of Santa Croce, the place where he was banned from entering in his final years.