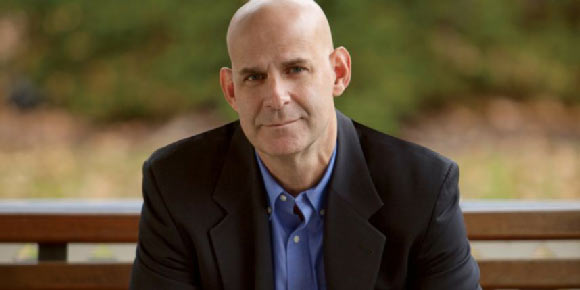 Harlan Coben is a celebrated name in American contemporary fiction. He is famous for his thriller and mystery novels. His last seven novels consecutively stood no. 1 on New York Times bestselling list.

Coben was born on 4th of January, 1962 in Newark, New Jersey and grew up in a Jewish family. He received his education from Livingston High School in New Jersey where he became friends with Chris Christie, a future politician. He majored in political science from Amherst College. Here he met a future author Dan Brown while he served as a member of Psi Upsilon fraternity with him. In fact, he also began his writing in his college years. On completion of his graduation he joined a travelling agency owned by his grandfather. He now resides in Ridgewood, New Jersey with his wife and four children.

During his senior years at college, Harlan Coben was hit by a sudden urge to write. In his early to mid-twenties he wrote his first novel, Play Dead (1990). The interesting thing about the book is that in the prologue Coben tries to dissuade readers from reading it and apologizes in advance for immature writing. It is a romantic suspense with an immature plot. He also wrote a medical thriller, Miracle Cure, published in 1991. Currently these two books are out of print as Coben has taken the copyrights back.

After these two novels, Coben steered his path from standalones to series writing. In 1995 he had, Deal Breaker, first novel in the thriller Myron Bolitar series published. The novel revolves around the protagonist Myron Bolitar, a sports agent, who is shown to be solving his client’s murder. The novel received 1996 Anthony Award and an Edgar award nomination as a Best Paperback original. By now Coben has produced ten successful novels in Myron Bolitar series and a short story.

Despite the lukewarm reception of his earlier standalone, in 2001 he penned another suspense thriller titled, Tell No One. The novel became an instant success for its soaring bestselling status. A French movie director adapted it into a film, named Ne le dis à personne (2006). The movie itself became a box-office hit in USA. The novel is about Dr. David Beck’s frantic search for his wife after receiving a cryptic message, who had been missing for eight years. His search leads him into web of lies and deadly secrets. The novel’s well reception brought it nominations for Anthony Award, the Barry Award and Edgar Award.

Subsequent to the success of this novel, Coben produced ten more standalones. In 2011, he put a stop to Myron Bolitar series and began its spin-off Mickey Bolitar series. The spin-off is a young adult series featuring Myron’s nephew Mickey Bolitar who also gets involved in the world of mystery and deception following his father’s death. The series of events beginning from a woman’s announcement of seeing Mickey’s father alive to his girlfriend’s disappearance plunges him into thick mystery and danger. Shelter marks the first novel in the series.

Harlan Coben is considered to be the first writer to receive all three prestigious awards, including an Anthony Award, Shamus Award and Edgar Award. He also wrote a short story, The Key to my Father, upon request from the New York Times published in its op-ed page in 2003.