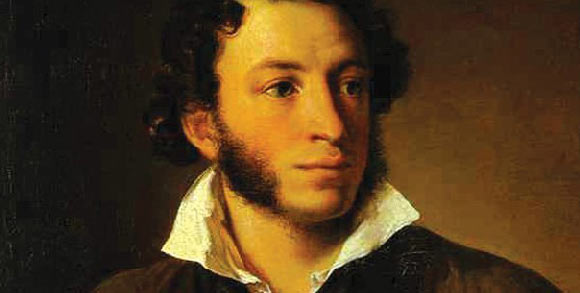 One of the chief names in literature during the Romantic era was Alexander Pushkin. He was an eminent Russian romantic poet and deemed the father of modern Russian literature. He penned some of the momentous nineteenth century poetry, novels, prose and dramas. These works include The Captain’s Daughter, Ruslan and Ludmila and Eugene Onegin.

Born on June 6, 1799, in Moscow, Russia, Alexander Sergeyevich Pushkin belonged to Russian nobility, whose ancestry can be traced back to twelfth century. His highly cultured and aristocratic family was descendants of old German and Scandinavian patrician ancestors.  He was raised under the care and supervision of nursemaids, governesses and French tutors. The plebian serfs and governesses taught him Russian. At an early age, he developed a passion for writing and had his first poetry work published during his adolescence.

Pushkin attended the prestigious Imperial Lyceum in Tsarskoe Selo, where he put his artistic creativity to use and began working on his first widely recognized literary work. In 1820, he published a long poem, titled Ruslan and Ludmila, based on a Russian folk tale that he heard as a child. Written in a verse form it is considered one of the distinguished poetry works in Russian literature. Upon completion of his studies, he joined the foreign office in St. Petersburg. Shortly, he was transferred owning to his close association with radical movements and active participation in social reform. His publication of ‘Ode to Liberty’ angered the government and thereupon had him banished. He moved from places to places and on his journey he discovered Lord Byron’s poetry.

In 1823, Pushkin penned two Romantic poems, titled The Captive of the Caucasus and The Fountain of Bakhchisaray, to enormous praise. Subsequently, he published a verse novel, Eugene Onegi (1833) that later earned the status of a milestone in Russian literature. The titular character served as a model for the unconventional literary protagonists. The literary work was first published in serialized form in a magazine during 1820s and early 1830s. The versified novel employs iambic tetrameter in 389 stanzas. The unusual verse form with feminine and masculine rhyme scheme and their unique markers lent a distinguished quality to poetry creating a new form called “Pushkin sonnet”. The narrator of the story is a persona of the author himself who appear to be educated and worldly. The major theme of the novel involves the correlation between fiction and real life, intelligence of the fairer sex and the vile constraints imposed by the society.

Early 1930s proved to be an extremely productive time for Pushkin in term of literary contribution. He wrote a host of highly acclaimed plays, such as The Feast During the Plague, Mozart and Salieri and The Avaricious Knight. One of his plays, Tales of the Late Ivan Petrovich Belkin (1831), is assumed to be inspired by Sir Walter Scott’s novel. Besides poetry and play writing, he wrote short stories as well. ‘The Queen of Spades’ (1834) is a poignant story of a gambler, who shared quite a few similarities with his creator. The short story was later adapted by Tchaikovsky into an opera. In his final years, Pushkin began writing a historical account of Peter the Great that he, unfortunately, failed to finish.

Alexander Pushkin’s literary work was heavily inspired by his predecessors; Derzhavin, Karamzin, Zhukovsky and Batyushkov. In addition to his instrumental literary contribution to the modern Russian literature, he was also credited for expanding Russian lexicon. He died young in 1837, having been brutally injured in a duel he fought against his wife’s brother-in-law.