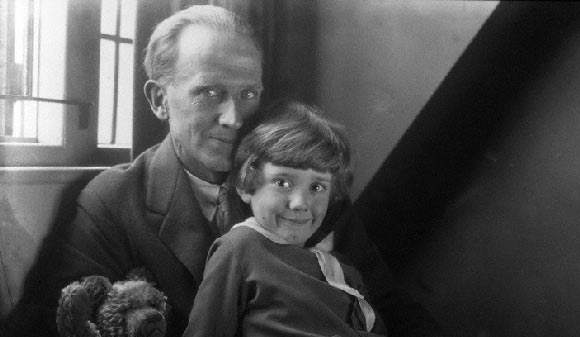 Alan Alexander Milne was a 20th century English playwright and children’s book author. The most famous of his works to date is his creation of children’s favorite teddy bear Winnie-the-Pooh books.

A. A. Milne (1882 –1956) was born in Hampstead, London. He was raised by his mother Sarah Marie and Scottish father John Vine Milne, a private school headmaster. Milne received his early education from Westminster School in London. Then he earned a mathematics scholarship to study at Trinity College, Cambridge. During his years in college he provided his services as a writer and editor for a student magazine, Granta. Upon completion of his graduation, Milne decided to move to London as he found his passion for writing. His writing was recognized by a British literary magazine, Punch.  He contributed essays and humorous poetry in the magazine for eight years.

Despite Milne’s stance on pacifism, during World War I he joined British Army as an officer. As his health started deteriorating, he was recruited to produce propaganda articles in Military Intelligence. In 1919, he was discharged and settled in London after getting married. Milne made his writing debut with, Wurzel-Flummer, a one-act farce, which he wrote during his military service. Later he denounced war in his literary piece Peace with Honour (1934). Subsequent to war Milne produced a number of plays that earned him success as a playwright. His early works include The Dover Road (1921) and Mr. Pim Passes By (1921). Both the plays successfully garnered positive reviews by the critics.

During the period of 1903 to 1925 he penned 18 plays and 3 novels. Milne offered his services as a screenwriter to the nascent British film industry. The screenplays he worked on include The Bump, Bookworms and Twice Two; Five Pound Reward. Milne produced a handful of novels during this period. One of his detective novels The Red House Mystery was published in 1922. In addition to Milne’s other works, he also adapted a novel The Wind in the Willows by Kenneth Grahame for theater. The adapted play was named Toad of Toad Hall (1929). Another extremely popular piece Jane Austen’s Pride and Prejudice was adapted into play as Miss Elizabeth Bennet in 1936. In fact, he adapted his own play into novel, titled Mr. Pim (1921).

Subsequently, his works diversified into children’s poems and stories. Becoming a father in 1920, he started working on a children’s poem collection, When We Were Very Young, which was published in 1924. A short story collection, Gallery of Children, came out next year which also laid grounds for Winnie-the-Pooh books. Children’s all-time favorite character, Pooh, made its first appearance in the poem, Teddy Bear. The poem was published in 1924 in a magazine Punch. Following the poem, the actual story book, titled Winnie-the-Pooh, was released in 1926. More Pooh story books followed and each character was illustrated by E. H. Shepard. The inspiration for the work was Milne’s own son, Christopher Robin. The boy in the Pooh books is Christopher’s namesake and his stuffed toys became model for Pooh’s character and his friends. In 1958 A. A. Milne won Lewis Carroll Shelf Award for The World of Pooh.

Despite the success of his children’s book, Milne was not content with the state of affair as he was only expected to write in that particular genre. He wanted to pursue writing for mature audience. He kept working on short stories and novels and remained popular in Britain and American, although he lost his adult audience by 1930s. His autobiography, It’s Too Late Now, was published in 1939.

Buy Books by A. A. Milne