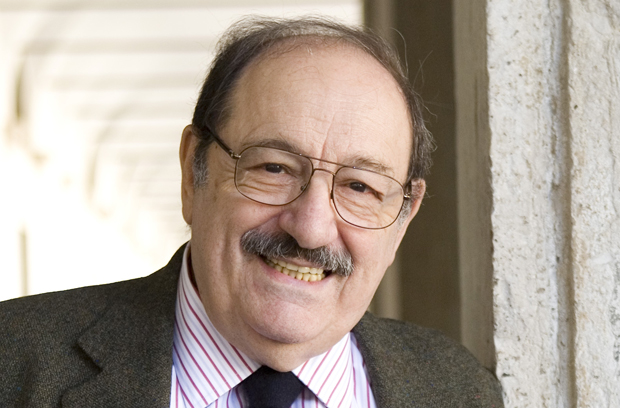 Umberto Eco is an Italian author who is best known for mystery novels that reflect Eco’s vast knowledge on subjects such as religion, literature, history, politics and philosophy. Umberto’s most brilliant work to date remains his 1980 novel, The Name of the Rose which is a mystery involving intellectual aspects of semiotics, literary theory, medieval history and biblical analysis. In addition to writing novels, Umberto has also excessively contributed to the science of semiotics through his studies, research and other academic works. His literary talents have also made him a philosopher, essayist and literary critic from time to time.

Born in the small town of Alessandria in northern Italy, Umberto was the only son of an accountant named Giulio. Umberto and his mother, Giovanna fled to a village in the Piedmontese mountainside during World War II to escape the bombings while his father was called upon to serve in the army. Eco initially received a Salesian education and later entered the University of Turin to study law upon his father’s insistence who wanted his son to become a lawyer. However, following his interests, Eco soon switched to studying medieval philosophy and literature. He wrote a thesis on St. Thomas Aquinas and in 1954 earned a doctorate degree in philosophy. During his educational period, Umberto had lost faith in God and left the Roman Catholic Church.

After graduation, Eco joined a state television channel as an Editor for Cultural Programs where he was able to gain experience and learn a lot about modern culture and journalism. In 1956, Eco published his first book, The Aesthetics of Thomas Aquinas, which was an extension to his doctorate dissertation. Also in 1956, Eco began his lecturing career at the University of Turin. Following a brief period of service in the military, Eco surfaced with his second publication, Art and Beauty in the Middle Ages. The extensive research based book gained Umberto the reputation of an important medieval scholar. Next, Eco began working as an editor for a well known publication in Milan named Casa Editrice Bompiani. His next book related to modern art, The Open Work came out in 1962.

Eco continued producing academic works throughout 1960s focusing on semiotics while also contributing to a number of scholarly publications on a regular basis. In addition to this, Eco also pursued teaching at various universities in Florence and Milan. He became the first professor of semiotics at the University of Bologna in 1971 and published A Theory of Semiotics in 1976.

The year 1978 marked a significant turn in Eco’s career when he decided to write a novel following an invitation from a friend. The detective story, The Name of the Rose became an international bestseller establishing a new identity of Umberto Eco. In 1986, the book was adapted to screen with a star cast of Sean Connery and Christian Slater. For Eco, there was no looking back and he continued writing exceptional novels such as Foucault’s Pendulum, The Island of the Day Before, The Mysterious Flame of Queen Loana and The Prague Cemetery.

A passionate book collector, Umberto Eco runs the Program for Communication Sciences at the University of Bologna and frequently travels to deliver lectures and speeches while continuing to write both fiction and nonfiction works and editing a weekly column for the magazine L’Espresso.