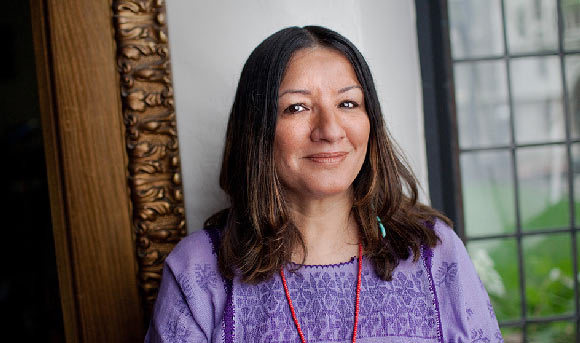 Sandra Cisneros is an established twentieth century American novelist, poet and short story writer. Her prominent works include The House on Mango Street (1984) and Woman Hollering Creek and Other Stories (1991).

Born on December 20, 1954, Cisnero grew up in Chicago, Illinois. Cisneros’ father developed a travelling proclivity and her family had to constantly move back and forth between Chicago and Mexico City. Due to constant travel they had to keep switching school and find new place to live every time. The instability in the family made six of Cisneros’ brothers to form a bond among themselves excluding their sister. The feeling of isolation aggravated as her father looked at his children as six sons and a daughter. In fact, the growing loneliness played a key role in developing her interest in writing. Her mother was the only one around her with an avid reading habit and social awareness and she made sure that her daughter would become an independent woman unlike herself.

Cisneros received her early education from a Catholic school Josephinum Academy. Here she polished her writing skills under a teacher’s supervision. She wrote poems on the Vietnam War when she was ten and won recognition for her work. According to herself, she truly began writing when she got enrolled in a creative writing course in college. In 1976, she graduated from Loyola University, Chicago and two years later she earned Master of Fine Arts degree from University of Iowa.

She attended the Iowa Writers’ Workshop where she was struck by a sudden realization that she had an advantage over her fellow writers for her rich cultural heritage. Being a Mexican woman instead of making her an outsider gave her the benefit to write differently without conforming to literary style of American canon which her classmates adopted. Her cultural diversity became a model for her writing in which she shared her experiences living in the Puerto Rican neighborhood of Chicago.

In her novel The House on Mango Street she drew inspiration from Mexican and Southwestern popular culture. She tried to depict the lives of the people she could relate to. Her stories were drawn from real life conversation she had heard from the people, especially the ones who were trivialized. She even confessed to recording the conversation in writing she had with people which she would later adapt into her writings. Another aspect that contributes to her unique writings style is her bilingualism and biculturalism treasure. Being familiar with two cultures enriched her work as she employed an array of experiences, thoughts and feelings with the help of diction from two different languages.

The publication of Cisneros’s first novel earned her huge popularity and Writer-in-Residence posts at US universities. She taught at a number of universities which include University of California and University of Michigan. Subsequent to writing her first novel, she published a collection of stories, titled Woman Hollering Creek and Other Stories, in 1991. It contains 22 stories and incorporates a wide range of narrative techniques. Each story employs different narrative style such as, first-person and third-person and omniscient narration. Besides that the theme of her works often addressed construction of female identity and sexuality which was repressed during her time by the patriarch society.

Sandra Cisneros contributions to American literature include; My Wicked, Wicked Ways (1987), Loose Woman: Poems (1984), Have You Seen Marie? (2012) and other notable works.