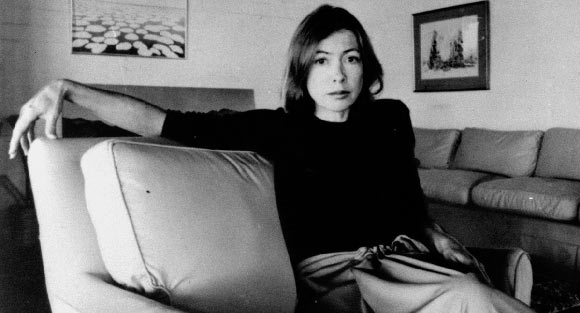 Joan Didion is a celebrated American novelist and a literary journalist. Her works address the growing dissatisfaction in the society owing to disintegrating American social morals.

Didion was born on December 5, 1934 and grew up in Sacramento, California. As a child, she used to write stories but never imagined herself being a professional writer. She was an avid reader from a very young age and often borrowed adult books and biographies from libraries after being granted permission by her mother. Being a daughter of an army officer she had moved places to places before her family finally settled in their home town. The constant relocation left her feeling like a perpetual outsider. Thus, she found solace in reading. She earned her Bachelor of Arts degree in English from the University of California, Berkeley in 1956. While studying she took part in an essay competition held by the famous Vogue magazine which she won and was offered a job.

Didion continued her work zealously as a copywriter and was later promoted to associate feature editor post. During her years at the Vogue she began writing her first fictional work Run, River which was published in 1963. In the span of five years she wrote a non-fiction book, titled Slouching Towards Bethlehem (1981). The book is based on a collection of magazine articles that details her experience in California. Another book of the same nature by the title The White Album was published in 1979.

One of her novels, entitled Democracy, was published in 1984. It illustrates the story of a wealthy heiress and her love affair with a CIA officer, who is a lot older than her. The book is set at the end of the Cold War and the Vietnam conflict in Hawaii and Southeast Asia. The novel is claimed to be unusual for its narrative technique. The narrator of the story does not belong to the world it is set in but an outsider and that is Didion herself. It gave her the opportunity to elaborate on and defend the choice of her theme and plot. The time this novel was first published it received positive and encouraging reviews for the literary style the author had employed. However, later the critics argued over the elements of the novel and criticized the use of realism in the novel which undermined its style and plot.

In addition to fiction writing, Joan Didion has produced numerous literary essays. After spending about two week in El Salvador with her husband, she penned an essay Salvador. It was a book-length essay, published in 1983, addressing the American involvement in El Salvador. She wrote another 12 essays of geographical nature in her collection, After Henry, that was published in 1992. She reverted to writing fiction in 1996 and produced The Last Thing He Wanted. It was a typical romantic thriller involving American military forces, spies, international conspiracies and imminent danger looming over protagonist’s head.

Didion and her husband, Dunne, both collaborated on several writing projects. They have co-written numerous screenplays. They adapted Didion’s novel Play It As It Lays into a screenplay. 2003 was a tragic year for Didion as her husband suffered a fatal heart attack and her daughter went into coma caused by pneumonia. She took her husband’s demise and daughter’s illness very gravely which she narrated in her book The Year of Magical Thinking. She found consolation in writing the book which proved to be a therapeutic exercise for her.