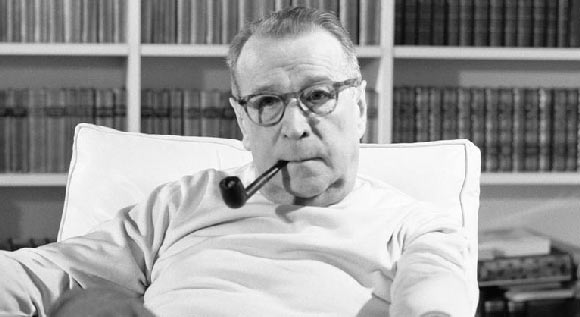 Georges Joseph Christian Simenon was a prominent twentieth century Belgian-born French author. He wrote prolifically and produced nearly 200 novels and other fiction works. The fictional French detective Jules Maigret is one of his best known creations.

Born on February 13, 1903, in Liège, Belgium, Simenon was raised by his parents Désiré Simenon and Henriette. Although he was born on 13th of February, his date of birth was registered as 12th by his aunt, due to superstitious significance of the date. He recounted story of his birth in the preface of one of his novels, Pedigree. His father was an accounting officer in an insurance company. At the young age of three, Simenon was enrolled at the Saint-Julienne nursery school where he quickly learned to read. Two years later he attended Institut Saint-André and at the advent of First World War he began studying at the Collège Saint-Louis. He left his studies on the pretext of his father’s heart condition.

Before beginning his writing career, Simenon worked as a baker, a bookseller and did a number of odd jobs. In 1919, he began writing for a local newspaper, Gazette de Liège where he covered mundane stories. While working as a news reporter he became acquainted with the sordid details of what goes on in the city including politics, crime, police investigations and crime-solving techniques. Publishing over 150 articles under the pseudonym G. Sim, he became a skilled editor. Moreover, he penned multitude of humorous pieces under the pen name Monsieur Le Coq.

Shortly, Simenon invested his creative energy in writing his debut novel. In 1921, he published his first novel, Au Pont des Arches, under the same nom de plume, as he used for his articles. During his time at Gazette he ran into a circle of painters, dilettantes, writers known as La Caque, with whom he experimented with drugs and drinking, besides discussing art and philosophy. Several of the La Caque members were later featured in his novel, Le Pendu de Saint-Pholien (1931). He married a young artist from Gazette, Règine Renchon but ended up getting divorced and having several love affairs.

In 1922, Simenon moved to Paris, where he published numerous short stories and novels under different pseudonyms. His creativity reached its zenith during 1920’s and 30’s, when he penned dozens of pulp fictions. In 1930, he created one of the most famous characters of all time, Commissaire Maigret. Maigret first appeared in a short fiction, titled Detective. By 1934, the author had published over 19 detective Maigret novels after which he took an eight-year break from writing as he extensively traveled around the globe.

Additionally, Simenon’s role during the Second World War was deemed suspicious. Some scholars are of the view that he secretly collaborated with the Germans, while others opposed the view labeling him more of an apolitical opportunist rather than a conspirer. The war years influenced Simenon’s writing as he authored some of his major works during this time period which include Le Cercle des Mahé, Le Testament Donadieu and Le Voyageur de la Toussaint. Subsequently, he moved to United States and Canada and returned to Europe after a decade. Inspired by his stay at Nogales, Arizona he wrote, The Bottom of the Bottle. Moreover, he penned numerous novels of psychological and autobiographical nature. Some of the titles include The Strangers in the House (1940), Le fils (1957), Pedigree (1948) and Mémoires intimes (1981). George Simenon is credited for 171 film adaptations based on his works. He died of natural causes on 4th of September, 1989.