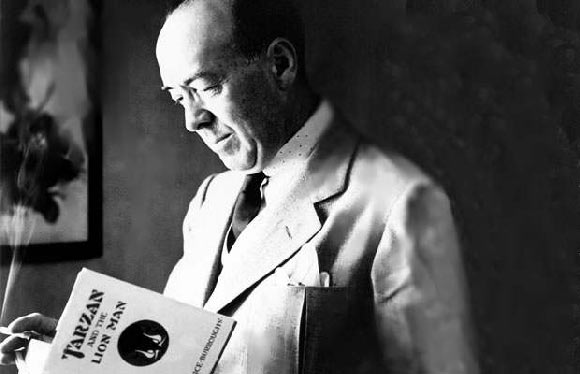 Edgar Rice Burroughs was an early twentieth century American writer. He is recognized as the creator of the iconic jungle hero Tarzan and John Carter the adventurer.

Born on September 1, 1875, in Chicago, Illinois, Burroughs was son of a businessman, George Tyler Burroughs. He received his early education from numerous schools. He moved in with his brother in Raft River, Idaho during epidemic of influenza  in Chicago in 1891. He studied at Phillips Academy and the Michigan Military Academy, earning graduation in 1895. He tried his luck in United States Military Academy, but failed the entrance exam. He also enlisted himself as a soldier, but was again rejected on account of his heart problem. He landed a number of odd jobs before he started working in his father’s firm. He got married to his high school friend in 1876. He left the job at firm and began odd jobs again. After seven years he started off his writing career.

Burroughs’ Barsoom pulp series was published by Frank Munsey in The All-Story magazine in episodic form. He wrote under the pseudonym “Norman Bean”. The first story in Barsoom series was titled, Under the Moons of Mars (1912). Barsoom is the fictional and romantic representation of planet Mars. The protagonist John Carter was shown to be mysteriously transported to Mars. Burroughs wrote ten sequels in the following years. Moreover, after writing three Barsoom sequels he published them in the novel form entitled A Princess of Mars (1917). He also penned Pellucidar stories which involve the adventures of David Innes and Abner Perry. Besides that he wrote a number of science fiction, fantasy, western and historical romances.

Another iconic character in the American literature came into being with the publication of Tarzan of the Apes. It was serialized in The All-Story magazine in 1912 and later in New York Evening News. Its demand in magazines led Burroughs to turn it into novel form. However, before its publication in 1914 by A. C. McClurg it was rejected by several publishing house. The novel narrates the story of an orphan John Clayton, who was born to a couple stranded on western coastal jungles of equatorial Africa. After his parents death he is adopted by an ape. He is named Tarzan in ape’s language. Tarzan grows up in jungle and acts like his adoptive family. Limited contact with humans leaves him ignorant of their way of life. Tarzan represents the separation of man from his society and this separation conditions him to be different from others of his kind and a lot stronger.

The massive success of the Tarzan series gave Edgar Rice Burroughs the opportunity to capitalize on it as he launched the comic strip and merchandise. In 1916, Tarzan of the Apes was adapted into a silent film. His literary legacy include twenty six Tarzan novels, seven Pellucidar books, eleven Martian and five Venus books and prehistoric trilogy, The Land That Time Forgot. In addition to these popular works he also penned western and social satires and a moon saga. He intended to write Jupiter stories before his death. I Am a Barbarian is one of his novels published posthumously. It is a historical romance based in Roman Empire under Caligula’s rule. He wrote prolifically in his lifetime and left behind 80 novels in total.

Edgar Rice Burroughs suffered a fatal heart attack and died instantly on 19th of March, 1950. He was inducted in The Science Fiction Hall of Fame in 2003.